The School of Continuing Education

Research and Development Center of Ecological Engineering and Technology

Center for Arts and Culture

The University Library traces its origins to the Chia Nan Junior College. From its founding in 1966, the college had been building a collection of books and journals. Starting in March 1971, a college library was established in the two-storied building located of today’s Department of Pharmacy. In January 1991, the library moved to the fifth through eighth floors of the building of Environmental Engineering and Science, occupying a space measuring 3,324 square meters. In 2000, when the college became the University of Pharmacy and Science, the library was relocated into a five-storied building with large international conference rooms that measured 7,958 square meters. Over the past 30 years, the university has experienced a rapid growth, and the need for a more comfortable, multi-functional library was increasingly felt to achieve the university’s commitment. Thus, in August 2001, the ground was broken on a new and modern library. Completed in September 2003, the library measures 17,800 square meters. In memory of the founder of the university, Mr. Wang Chen, the library was named the Wang Chen Memorial Library. The grand opening for the new library took place on December 8, 2003, with President Chen Shui-bian in attendance.

Given the increasing workload of the computing and networking services, in 2001 the computer center, originally a subdivision of Academic Affairs, became a separate organization named the Network Council with three sub-service groups. To adapt to information technology trends, the Network Council merged with the library in 2003; it was subsequently renamed the “Library and Info Center” to support the campus-wide library and information services. The mainframe computer was also relocated to the third floor of the newly completed building of Information Sciences in 2004. Equipped with seven brand new computer labs, the building is located in the area adjacent to the Wan Chen Memorial Library. This area has become the Library and Information Service center on campus.

In June 1992, the library utilized a library automation system to manage the library collections and services, which led the library services to excel among junior college libraries. In 1994, the campus networking was completed and linked to TANet. In 1996, the services of the online public access catalog were provided to retrieve library collections. In January 2000, the library joined CONCERT and acquired access to various electronic databases. In 2003, the “eThesys” system was adopted to digitalize graduate students’ theses. From 2002 to 2005, the university became involved in the three stages of the campus networking project to connect all university buildings via a fiber optic network (Giga bandwidth) and upgraded its facilities, including the network backbone switch, computer labs’ software and hardware, and the library automation system. In addition, it developed an administrative computer system to facilitate the processing of administrative affairs. In order to promote the efficiency of administrative services and the quality of computer instruction, the campus-wide wireless network was completed; a division of Digital Instruction was also established as a subordinate unit of the center in 2006. The goal of establishing an e-campus will be fulfilled in the near future. 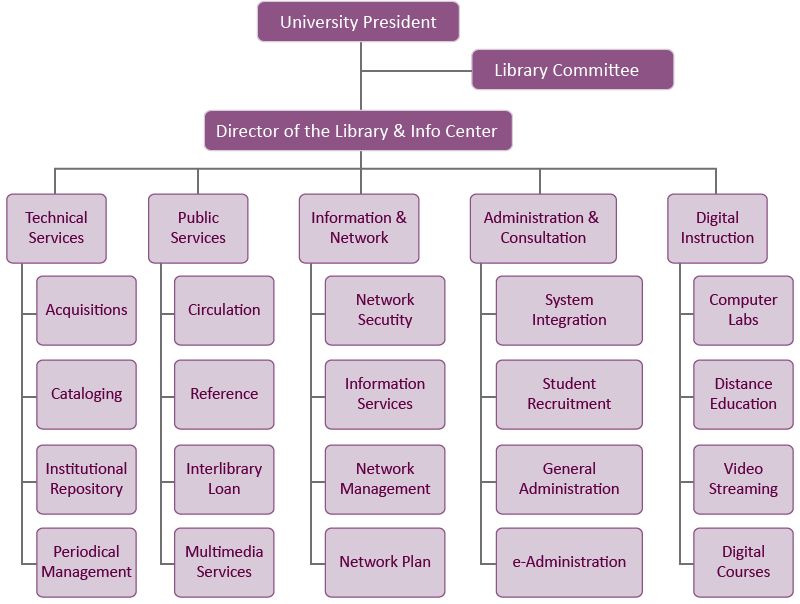 The organizational structure of the Library and Info Center consists of a director and five divisions. In addition, there is a Library and Info Center Committee, which is made up of faculty members from each college. This committee advises the library in the establishment of all policies and makes recommendations on the allotment of funds for library purchases and acquisitions. The responsibilities of each division are outlined below: